Below is the press release from Stern :

WWE Wrestlemania calls players into the ring as WWE superstars embarking on a quest to become the WWE worldwide heavyweight champion. Players train their wrestlers and then compete in a series of matches leading them on the road to Wrestlemania.

The WWE Pro and the Limited Edition machines feature an innovative upper pinball playfield wrestling ring. With the flipper buttons, players control two "Slammer" slingshot-style kickers in the ropes of the ring. Completing the three drop target bank starts a wrestling match. Players rack up points and pin opponents in the ring by shooting into a kick out hole. Keeping the ball in the ring and hitting as many targets as possible will advance players through the match. Multiple ramps guide the ball throughout gameplay, while brilliant lightshows highlight the all LED playfield. Ten licensed songs include intro music for wrestlers that players choose. WWE announcers Jerry "the King" Lawlor and Michael Cole add play by play excitement.

Wrestling legend Hulk Hogan will individually autograph each of the numbered WWE Legends of Wrestlemania Limited Edition (LE) machines on a bottom arch mounted gold plaque. With only 400 autographs available, this collectible must be limited to that number of games. The LE game art features classic WWE stars, of course including Hulk Hogan. Actual WWE wrestling action is projected on the LE's replica "Titantron" playfield level 5.7 inch LCD directly above the ring. The ball is always wild when it comes into contact with the LE's exclusive "Chaos" spinning DISC while a third "Wham! Arm" flipper allows players to knock the ball off a wire ramp.

"The WWE franchise features unique characters and fantastic action sequences that are captured in these pinball machines. WWE Wrestlemania pinball games will appeal to a very large and diverse group of both WWE and pinball fans," said Gary Stern, Chairman and CEO of Stern Pinball. "This game is unique with an innovative wrestling ring and other features that will captivate pinball players of all skill levels."

At the CES 2015 Stern will also be showing its Star Trek, The Walking Dead, and Ford Mustang pinball machines. 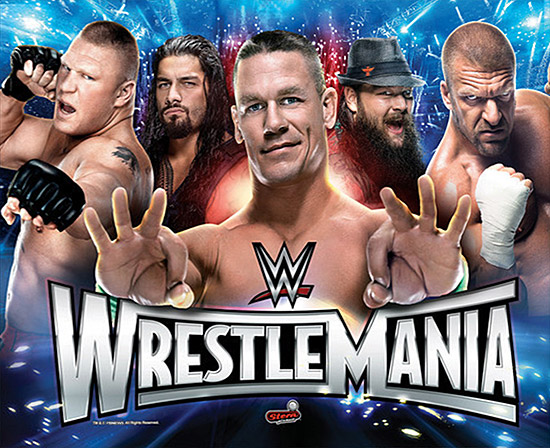 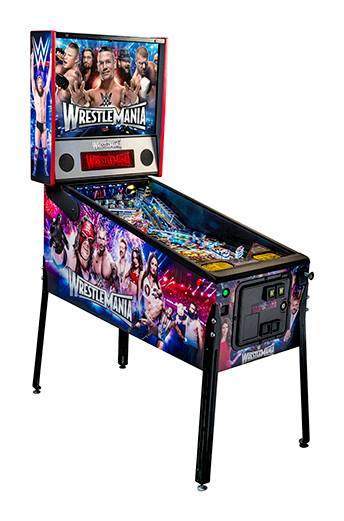 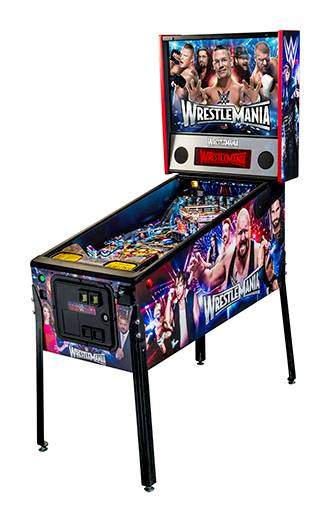 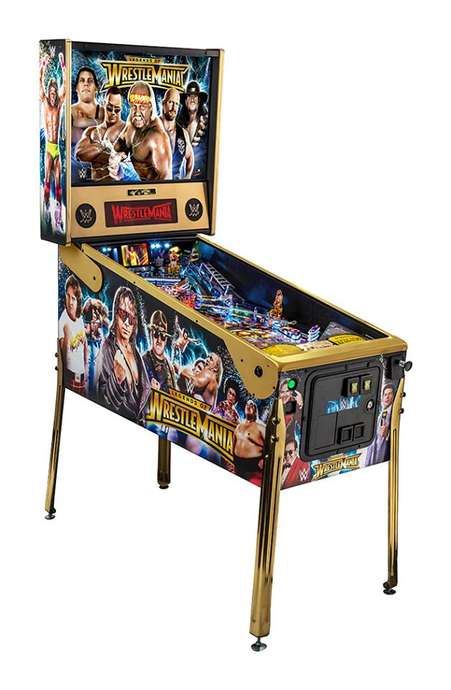 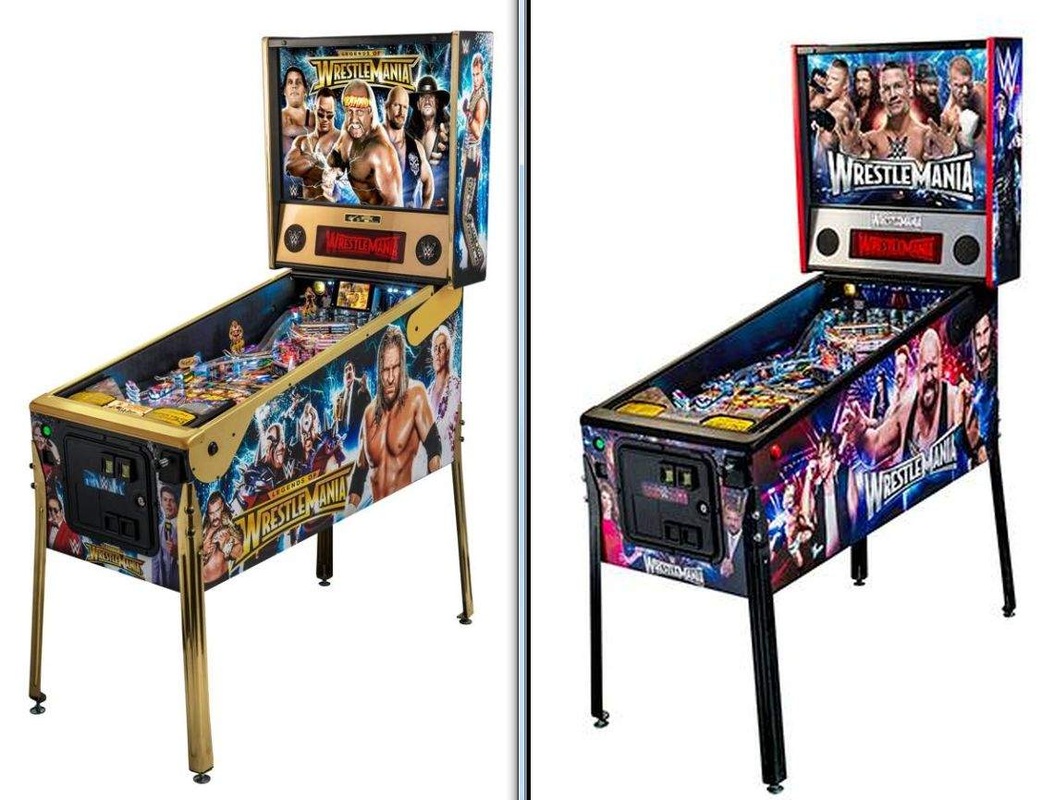 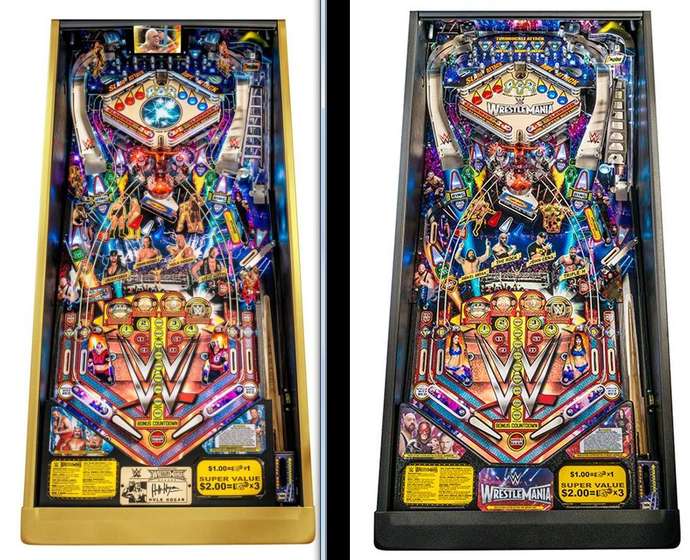 Hulk Hogan autograph on the 400 LE's being produced 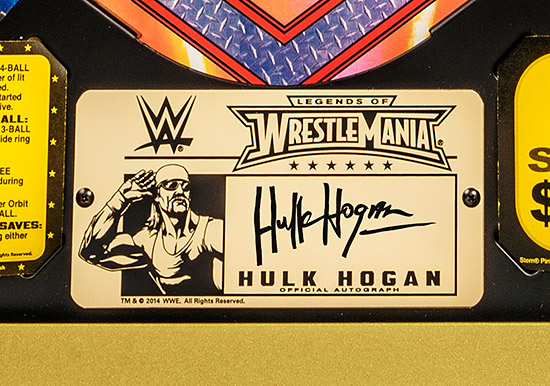 The LCD screen above the ring on the LE 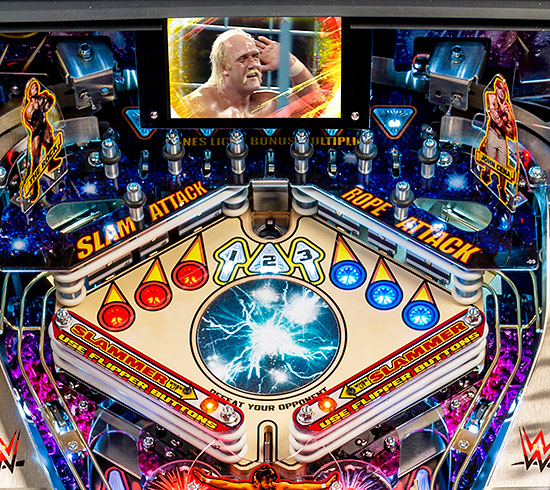 Below are random pics of the Pro model 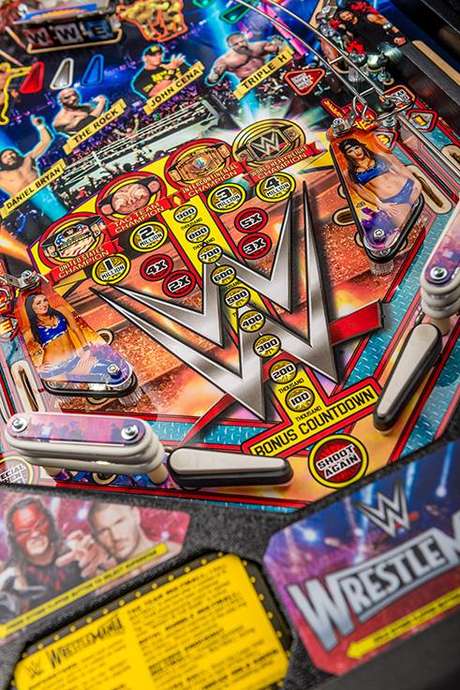 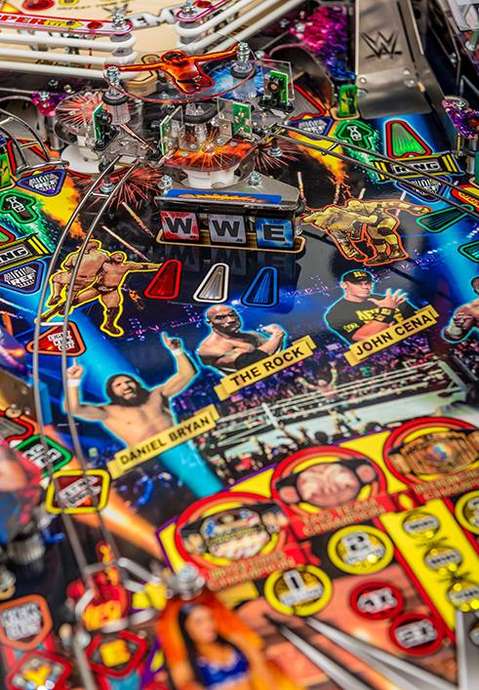 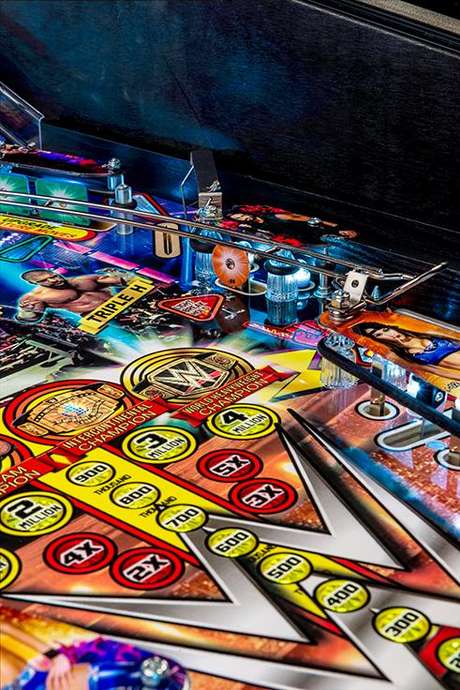 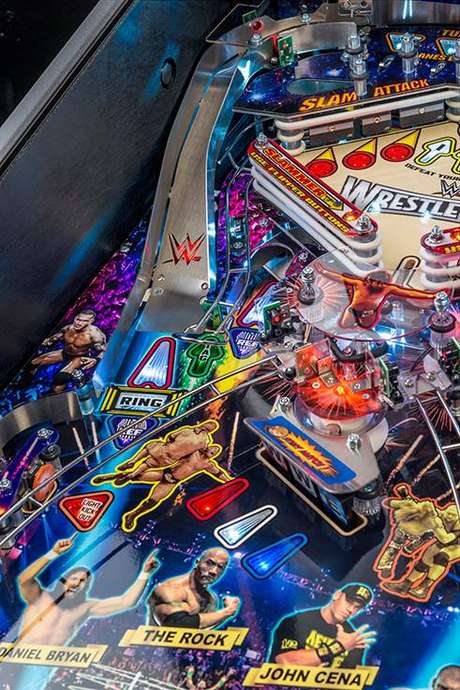 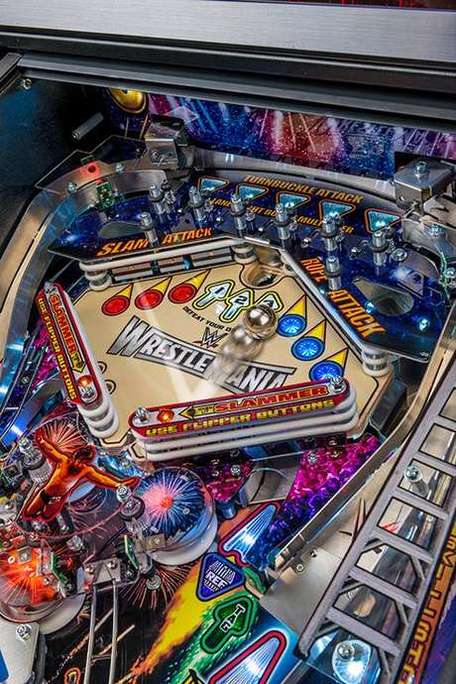 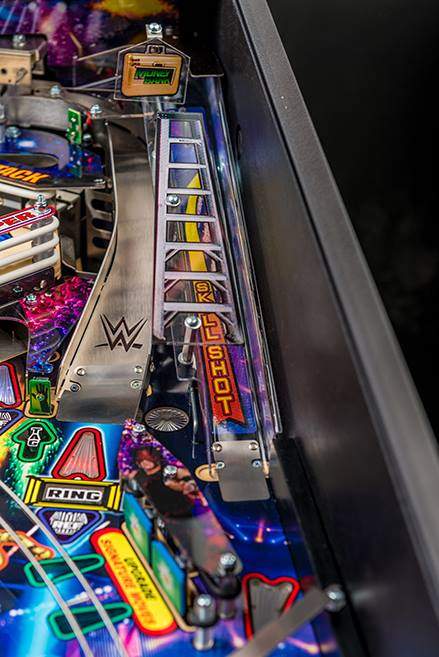 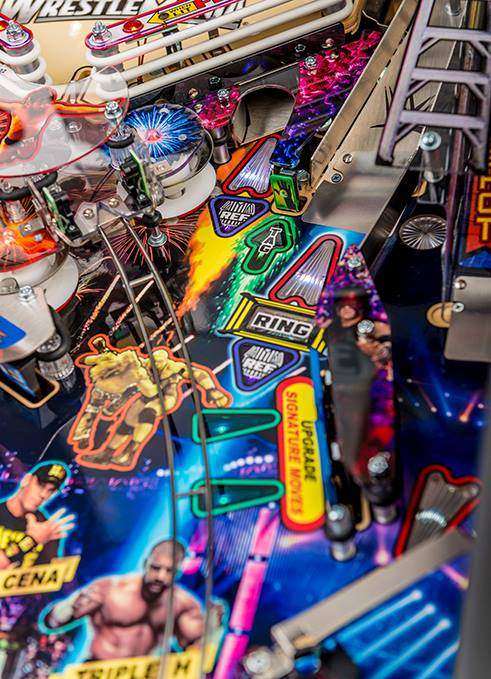 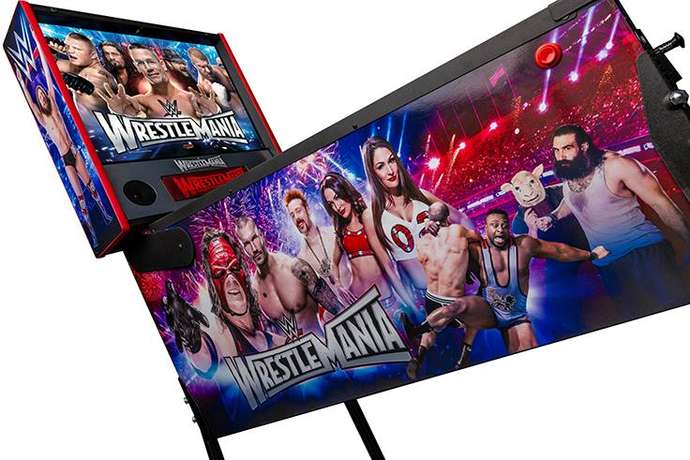 Pic of Stern's new "Spike" system that replaces the old "Sam" system that's been around for years. Read more about the new system below in a press release from Stern. 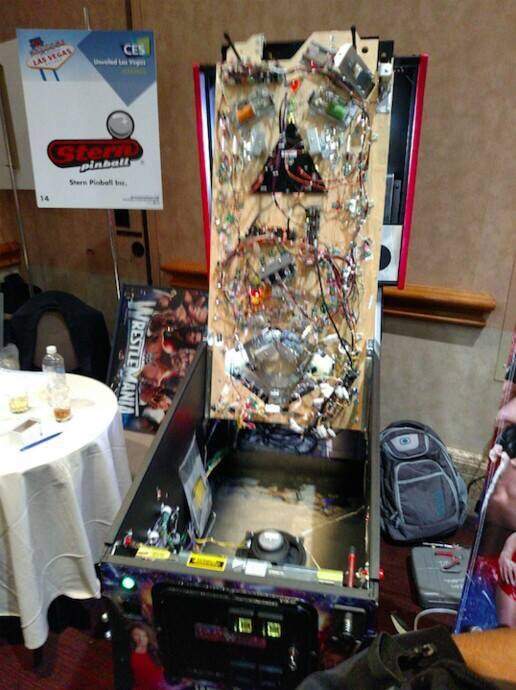 “The modular nature of the system will allow game designers to embrace new technologies to evolve the game of pinball while also improving earnings, reliability, serviceability and efficiency,” said George Gomez, Executive Vice President of Product Development at Stern Pinball.

The new SPIKETM system is based on distributed processor architecture and an industrial grade network protocol. These technologies reduce product complexity and simplify the manufacturing of the game resulting in a more efficient, reliable and easier-to-service game. The system is designed to facilitate integration of various display technologies such as varying size LCD displays both on the playfield and in the backbox. The scalable nature of the system allows for the integration of Wi-Fi and numerous new game specific features and technologies.

“SPIKE is the latest step in our ongoing program to leverage technological advancements to improve the game for all segments of our customer base,” said Gary Stern, Chairman and CEO of Stern Pinball. “Commercial customers such as operators and location owners will be particularly well served by SPIKE.” 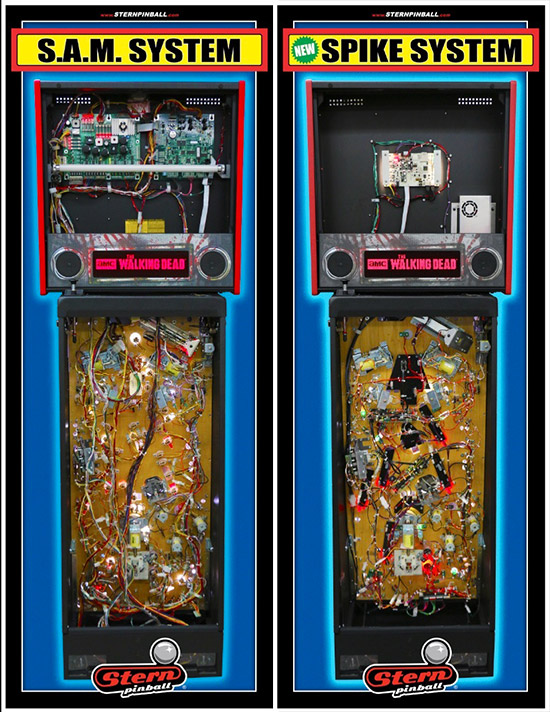