November 29 2012
Below is the press release from Stern Pinball


MELROSE PARK, IL – November 29, 2012 – Stern Pinball Inc., the world’s leading maker of real pinball games, announced today the release of The Avengers pinball machine. The newest member of the Stern collection memorializes The Avengers, a franchise that has remained a staple in pop culture since it first appeared as a comic book series in 1963. The Avengers will join Stern’s revolutionary line-up of comic inspired machines including X-Men, Spiderman, Iron Man and Batman.
For almost 50 years The Avengers have delighted fans through comic books, television series and movies. Stern is thrilled to bring the franchise to pinball and provide fans with a new medium through which to enjoy The Avengers. The machine features a dynamic setting that incorporates six iconic Avenger heroes: Iron Man, Thor, Hulk, Captain America, Black Widow and Hawkeye. Players help The Avengers assemble to defeat the notorious villain Loki. The Avengers pinball features an animated twisting and pounding custom molded HULK, drop targets and a spinning cube bonus, in addition to plenty of multiball action.
“Throughout the years The Avengers have cultivated a loyal and energetic fan base,” said Gary Stern, founder, CEO and Chairman of Stern Pinball. “Stern is pleased to have the opportunity to give these fans an Avengers pinball game to enjoy for years to come.”
The Avengers game continues both the Stern Pinball and the Stern family tradition of producing quality pinball machines for young and old. The company traces its lineage to Philadelphia in the 1930s when Sam Stern entered the business of operating pinball games. Stern passed his lifelong enthusiasm for the game and the business of pinball to his son Gary Stern who founded Stern Pinball. Today pinball remains one of America’s favorite pastimes.
Pricing and Availability:
Avengers Pro: $5699 MSRP
Avengers LE: $8099 MSRP
HULK LE: $8099 MSRP 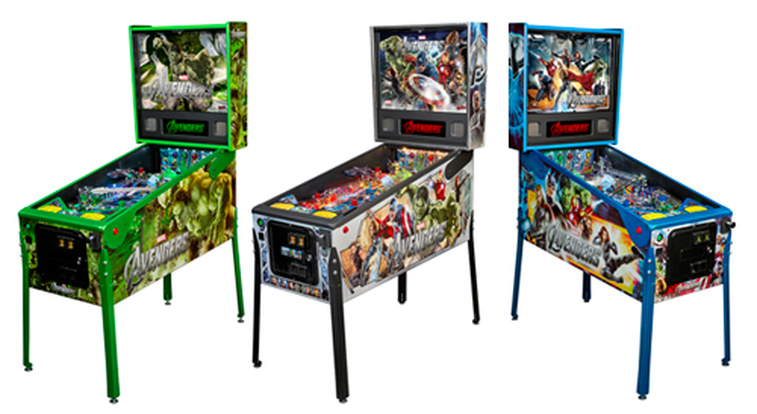